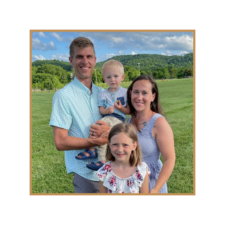 As I reflect on 2020, I feel like I have grown more than I can explain. I love plans and schedules. With my role as in-country director of SRI, I spend 85% of my time communicating with team leaders and organizing their details for their time in the DR.

In March when we were planning to fly back to the states for just 3 weeks, I told Jeff it felt very reckless to leave San Juan. I wanted to just stay put because life in the United States seemed out of control. Fast forward to now, and we have been stateside for 10 months. We have embraced the chaos of whatever life has thrown our way.

I have found that I am very hesitant to plan much more than a week in advance, because who knows if any one of us will be quarantined or what new restrictions will be in place. In the past I was planning up to 3 months in advance, I’m sure a day will come where we will be back to being able to do that but for now am at peace with taking one day at a time. It is reassuring to me to know that God holds my tomorrow. I just need to move forward in faith and trust Him.

Now a quick recap on our holidays and what’s ahead for this month. We spent the week of Christmas in Peoria, Illinois with Jeff’s family. It was nice to catch up with everyone and play games. Braegan enjoyed playing with all of her cousins, and Brantley enjoyed helping everyone open their gifts. Braegan and Jeff also had roles in the family nativity story. Braegan was an angel and Jeff was Joseph.

Following Christmas we returned to Fort Wayne for a couple days, we then drove to Anderson, Indiana to spend a few days at an AirBnB. Jeff wanted to stay somewhere that either had a fireplace or a hot tub. We found a perfect little carriage house that was built in the 1840’s with a fireplace. It was perfect getaway to ring in the new year. The kids had a little loft area to play in, and Jeff and I enjoyed sitting by the fire. It was even decorated for the holidays which made it even cozier.

Braegan started back to school this past Tuesday. She was excited to see all of her friends again! She has mastered addition and is almost through subtraction. She has started to learn some multiplication facts. Her class is also working on a Young Author’s writing project. She is planning to write about her surprise trip to Disney World a couple years ago.

Brantley continues to keep us on the move. We are realizing that he can function on little sleep which is quite exhausting. He’s climbing on everything and saying new words daily.

Last month I asked for prayers for my grandma as she was having some health issues. We were able to visit with her for the first time today since October. She is almost fully recovered and taking it easy. She has another doctor’s appointment next week. Thanks for your prayers! It’s still hard for me to believe she is 90, because she has the same spunk she has always had!

Jeff is heading to Peoria tomorrow to help his parents as they just bought a new house. They have some projects for him to work on. Next weekend he will be competing in his second Pickleball tournament in Indianapolis. He will be playing with the same partner he had when he played in his last tournament in October. Braegan is also counting down the days until her golden birthday on February 8th.

-patience with one another

-better sleep at night and restful moments during the day